What are stinging insects?

Stinging insects such as wasps, hornets, yellow jackets, or mud daubers can turn your backyard into an uncomfortable & dangerous place in the summer months. These stinging insects are aggressive and territorial, and while they serve a vital role as part of the ecosystem, they nevertheless deliver painful stings to anyone unfortunate enough to come into contact with them or be considered a threat. 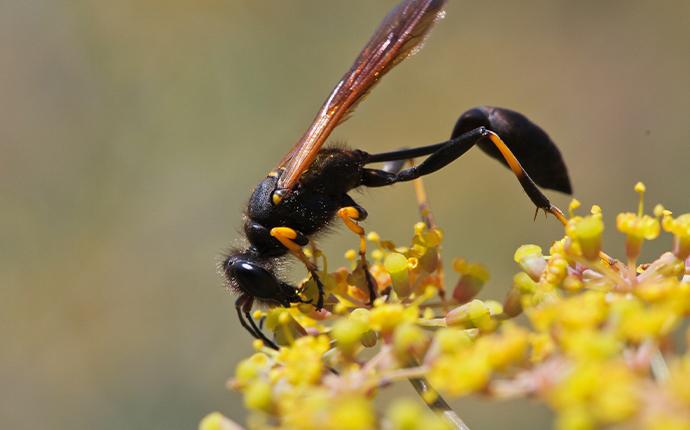 Each year as spring arrives, these insects emerge from overwintering and begin to search for new nesting locations. If you’re unfortunate enough, that could mean your property. Stinging insects infest yards across western Washington for a variety of reasons - but everyone is better off without stinging insects in their yards. Read on for more information about the various stinging insects found in Washington state, the dangers they pose to you and your family, and why professional treatment is always the right move when stinging insects come buzzing.

Wasps are a wide variety of stinging insects in the order Hymenoptera that can carry many different colors, shapes, sizes, and diets depending on their species. Wasps are different from bees in both their body shapes and in the fact that they can sting multiple times while bees can sting only once. They are identifiable by their narrow petiole “waists.”

Wasps serve an important part of the ecosystem as both pollinators and predators, feeding on nectar and on other insects. Wasps are divided into social and solitary subgroups, with social wasps living in colonies and solitary wasps surviving on their own. While the most commonly known wasp species are social, the majority of wasps in the wild are actually solitary.

Yellow jackets and hornets are both types of wasps.

Paper wasps are slender, narrow-bodied insects with long legs and reddish-orange to dark-brown or black coloration, with yellow markings on their abdomen. They grow to about 1/2 inch long. They are named for their paper nests, which are umbrella-shaped and with hexagonal cells that are left open and visible. Paper wasp nests can often be found along eaves, window and window frames, porch ceilings, deck floor joints, rafters, etc.

Paper wasps are distinguishable by their thin pinched waists. Although they are not as aggressive as other types of stinging insects, paper wasps are fiercely territorial and will deliver painful stings to anyone they perceive as a threat to the nest.

Hornets are a type of wasp and have a dark coloring. They are typically larger than other types of wasps, growing up to 2 inches in length. Their paper-like nests can contain hundreds of colony members. Hornets will aggressively defend their nests from any potential intruders.

Often confused with yellow jackets, hornets tend to be larger in size and have bigger nests than other wasp species.

Bald-faced hornets are among the most common types of hornets in the United States, distinguishable by their black and white markings (most wasps are black and yellow). Workers range from 5/8-3/4 inch in, sometimes longer, with queens growing even larger still.

The Bald-faced hornet is mostly black with a characteristic white pattern over most of its face, giving it its common name. Bald-faced hornets construct pear-shaped nests that can be found in nearby trees, chimneys, under eaves, or nesting behind siding, in barns, attics and other structures. Their nests grow relatively large compared to other species. While typically more docile than other yellowjackets, the hornet is extremely protective of its nest and will sting repeatedly if disturbed.

Mud Daubers are a type of wasp that is known for their behavior of building tube-shaped nests using mud and dirt. They are dark brown in coloration and range from 1/2 inch to an inch in length.

Mud daubers feed on insects like spiders and other nuisance pests, making them generally seen as helpful. Mud daubers are among the least aggressive of wasp species, but the mud tubes they leave behind can become a nuisance and an eyesore for property owners.

​Yellow Jackets are mid-sized wasps that range from about 3/8 - 5/8 inches long. They are named for their distinctive yellow and black coloring. They prefer to make nests underground or in concealed spaces, making a paper-carton nest with multiple layers and hundreds of individual cells. These underground nests can grow as large as a basketball. They can also be found nesting in attics, behind walls, inside hollow trees, barns, in retaining walls and other landscape.

At rest, the yellow jacket’s wings are folded lengthwise along the body. Yellow jackets have a distinctive side-to-side flight pattern that can quickly differentiate them from other wasps that look similar. Yellow jackets are extremely aggressive and often sting without provocation.

Carpenter bees are large black bees, about 1/2 to 1 inch in length, that appear fatter than typical bees and much fatter than wasps. Carpenter bees get their name from their behavior of boring into wood. Unlike termites, carpenter bees do not eat wood but rather cause damage to structures by drilling circular holes in order to tunnel inside it. Despite this difference, they are still considered an extremely destructive pest due to the wood damage they cause.

Unlike other common bees, carpenter bees are not social insects and build individual nests into trees outdoors or into the frames, eaves or sides of buildings. The most common sign that you have carpenter bees is the presence of the round, smooth holes they bore into wood.

While stinging insects are largely considered more of a nuisance than a danger, and serve a vital role in nature, their stings can nevertheless be quite painful and even dangerous if enough wasps sting you at the same time. Wasp and hornet stings can also lead to severe allergic reactions that can be life-threatening. If you agitate the nest, even accidentally, the sheer number of wasps that might come out to attack you, combined with the fact that they can sting multiple times, can have serious detrimental health effects.

Steps You Can Take To Prevent Stinging Insects In Western Washington

With both the nuisance that having wasps buzzing around you brings and the dangers they pose, preventing wasps around your home is always a smart move.

Here are some tips to help protect your property and mitigate stinging insects in your yard:

Why To Call Guard Pest Control For Help With Stinging Insects

DIY stinging insect removal treatments aren’t just difficult; they can be outright dangerous to attempt. Wasps and hornets are already challenging pests to treat since their flying ability allows them to get into almost anywhere. But should you disturb the nest, either accidentally or on purpose, you could find yourself covered in stings.

Without the proper tools and equipment, trying to face off against stinging insects alone could be quite costly. And if you fail to eliminate the entire infestation, you risk having it come back again in full force later, making your sacrifice for nothing.

If stinging insects are buzzing around your yard, don’t go it alone: contact the Snohomish, WA pest professionals at Guard Pest Control for help. We have the tools and training to handle stinging insect infestations safely and effectively, allowing us to get rid of the wasps without putting you or your loved ones at risk. Contact us today for more information about our stinging insect treatment options.

What To Do About Carpet Beetles In Your Snohomish Home

Is It Dangerous To Have Silverfish In My Everett Home?

Silverfish are home-invading pests in Everett that look extremely odd. They can even destroy belongings once they get inside of area properties. Find out how to prevent these pests, and what to do if…

How To Keep Rats Away From Your Snohomish Property

Worried about rats getting into your Snohomish property? You aren’t alone. Check out our latest blog post to learn more about how to keep them away from your property.