What are pantry pests? 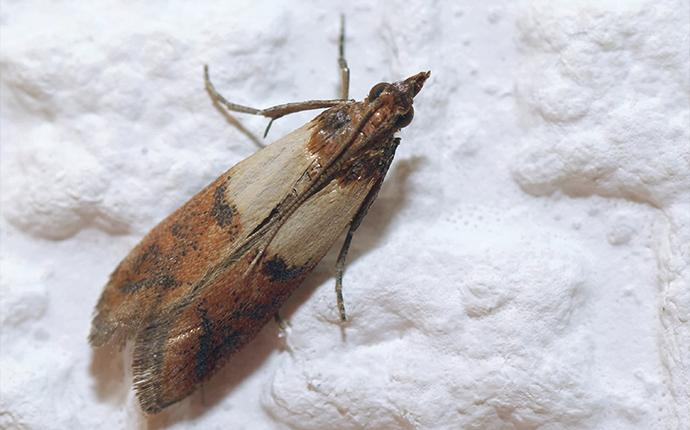 While they’re primarily a problem for food-processing plants and supermarkets, they can nevertheless cause a lot of problems in residential homes. Read on to find out more about the pantry pests threatening to invade your pantry, the problems they cause, and how to stop them.

Cigarette beetles are yellowish to reddish-brown in color and about 1/10 inch long. Oval in shape, this pest appears hunchbacked because its head is bent downward. The drugstore beetle’s serrate antennae are smooth and end in a 3-segmented club.

As their name implies, the cigarette beetle prefers to infest dried tobacco, but will also feed on book bindings and stored products found in homes. A female cigarette beetle can lay up to 100 eggs on the food products from which the larvae will feed.The development time from egg to adult is six to eight weeks and adults live two to four weeks. The larvae typically feed on a variety of pet foods, including dried and processed foods such as grain, pasta, raisins, rice, seeds and even cockroach poison. Cigarette beetles will sometimes feed on furniture stuffing and dried floral arrangements as well.

Cigarette beetles are active all year long but prefer temperatures over 65 degrees and low-lit areas, but can be pushed indoors when these conditions are not met outside. Inside, they will infest storage areas that contain dried tobacco. They will also invade homes to feed on cereal, flour and other stored products that are a staple of most pantries. Although known for feeding on cured tobacco, cigarettes and cigars, in the home this beetle is most commonly found in pet foods, cereals, nuts, and candy. It may also infest dried pepper arrangements, wreaths, and spices such as chili powder or paprika.

Drugstore beetles are reddish-brown in color, about 1/8 inch long, and oval-shaped. They are considered pantry pests and commonly infest a wide variety of foods, including those made from dried plant or animal products. Drugstore beetles are named for their tendency to feed on pharmacy drugs, but they will also infest spices, coffee beans, seeds, dried pet foods, bread, and flour products such as cereals, cookies, dry mixes, and meal.  Drugstore beetles sometimes feed on non-food items such as wool, leather, books, wooden objects and even tin or aluminum foil.

While the entire lifecycle of a drugstore beetle lasts about two to seven months, the beetle will generally cause most of its damage in the larval stage. A female drugstore beetle will lay up to 100 eggs on its food source.  For about four to twenty weeks, the small, white larvae burrow through the food and consume it before building a cocoon and pupating within the span of 12 to 18 days.

Red flour beetles are shiny and reddish-brown beetles that grow to about 1/8th of an inch in length, with distinctive antennae that abruptly end into an enlarged three-segmented club. They have a flattened, oval shaped body and are winged, using their wings to fly short distances.

The most common signs that red flour beetles have invaded your home is to see the actual beetles either crawling or flying throughout your home, or by seeing them in your flour or cereal products. You may also notice holes where they have chewed through the packaging of flour or other dry cereal products that are stored in your kitchen or pantry areas.

Grain beetles are slender-bodied, flat, brown beetles that are about 1/10 inch long with six saw-like tooth projections on each side of the thorax. Both the larvae and adults feed on products including flours, cereals, candies, dried fruit and more. It’s not uncommon to find them infesting pet food, bird see and rodent bait.

The grain beetle is a major pest of stored food products in homes and commercial facilities. The pests usually get into goods when they are in production or on their way to stores or homes. Tainted items on grocery store shelves can lead to a mass infestation in the local area. In homes, grain beetle infestations begin when residents bring infested food into the kitchen. The insects quickly spread to other bagged or boxed products.

Indian meal moths begin their life cycle as eggs laid by females directly on or inside packaging of food products. The eggs hatch into larvae that resemble small, creamy-white caterpillars but that are more worm-like with brown heads and bodies that can sometimes be tinged pink or green depending upon what they are feeding upon. Damage to stored food products is caused by the larvae spinning silken threads as they feed and crawl, thus webbing food particles together. The larvae feed on such food products such as dried fruits, powdered milk, cornmeal, flour, raisins, prunes, nuts, chocolate, bird seed, dry dog and cat food, fish food, graham crackers, pastas, etc.

In residential pantries, Indian meal moths typically infest flour, grains, cereals, dried fruits, pasta, powdered milk and many other items commonly found stored in homes. They may also be found in dry pet food and stored bird seed. In fact, in most cases they are already present in birdseed when it is brought into the home. Birdseed and pet foods should always be stored in sealed containers and should not remain in the original packaging. It is also important to inspect and remove any infested dried goods at the onset of sighting adult moths.Indian meal moths have also been known to infest candy bars and baked goods in vending machines.

Weevils are very small beetles, about 1/16- to 1/4-inch long with dull reddish-brown to black coloration and four reddish-yellow spots on its back. They are primarily attracted to wheat and stored grains. In homes, they can infest pantries and make their way into dry food products. In the wild, they are particularly damaging to crops. Most have the ability to chew through paper in order to access a food source. They can be found in nuts, seeds, cereals and grain products.

Weevils thrive in warm conditions and mature more quickly under high temperatures. They take longer to develop in cold temperatures and have a lower survival rate. In the home, weevils can be brought in on packaged foods or they can come in from outside. Once inside, a population can grow and expand to food items stored nearby if they are not controlled.

The biggest threat they pose is of infestation and spoiling food - creating waste and increased living costs to the homeowner. While they are not usually a direct threat to people or pets inside a home, the food contamination they are responsible for can nevertheless lead to negative health effects if someone ingests the food after pantry pests have made contact.

Beetles, weevils, and moths typically do not cause damage other than the contamination of food products. Most of the time, their larval stages are very destructive and can contaminate food products as well as breed in areas where stored products are kept. Beetle-infested items often cause mold problems due to moisture buildup.

Steps You Can Take To Prevent Pantry Pests In Western Washington

If you want to keep the food in your pantry safe and secure, it pays to stop pantry pest infestations before they happen using effective preventative measures. Pantry pests are most often brought into the home through packaged food products that have already been infested, but they can also enter your home from outside.

Here are some ways you can prevent pests in your pantry:

Why To Call Guard Pest Control For Help With Pantry Pests

If pantry pests have invaded your stored food products, you shouldn’t attempt to handle the problem on your own. Controlling pantry pests can be a tedious task because the source of the infestation may be difficult to find, making it difficult to identify and eliminate the problem at its source. Pantry pests can also be difficult to eradicate because of the sheer range and food products they are likely to infest. Most pantry pests breed almost continuously since they tend to live in or near their food source and can produce several generations in a single year, so failing to treat the entire problem at once will only allow it to spring up again a short time later.

When it comes to effective treatment and prevention for pantry pests, over-the-counter products are rarely sufficient to create a permanent solution. Instead, you need to consult a professional for help.

At Guard Pest Control, our team has decades of experience handling pantry pests as well as all the other pests that might try to get into your home. If pests are threatening your pantry, we’ll find them, eliminate them, and keep them from coming back. Contact us today to find out more about how a comprehensive pest control treatment plan from Guard Pest Control can protect your Snohomish home or buisness from pantry pests.

How Did These Pantry Pests Get Into My Monroe Home?

Three Things Everyone In Snohomish, WA Ought To Know About Pantry Pests

Nate did a fantastic job not only checking on our rodent problem but also educating us on where they could be entering from and how to stop them from getting in. He was very professional and personable in all aspects of the job. I highly recommend their services and will most definitely reach back out to them for any future issues.

Struggling To Get Rid Of Pharaoh Ants In Your Monroe Apartment?

Ant infestations are daunting. Find out how the local pharaoh subtype can be managed in Monroe. Guard Pest Control can help with prevention and extermination.

Leave Mud Daubers Alone In Monroe Or Attempt To Get Rid Of Them?

Are mud daubers a problem here in Monroe or do they help homeowners? Find out today and learn what methods work best to keep stinging insects at bay.

Are You Struggling To Keep Cockroaches Away From Your Monroe Home?

Are cockroaches or other undesirable and potentially harmful pests living in your home? Promptly speak with a professional pest exterminator to discuss potential solutions.