Ants are small, social insects best known for the small mounds they build in lawns across Washington during the warmer months of the year. However, don’t be fooled: while the individual hill might appear small on the outside, it can reach deep into the ground, with hundreds of interconnecting tunnels and chambers that house tens or even hundreds of thousands of individual ants. 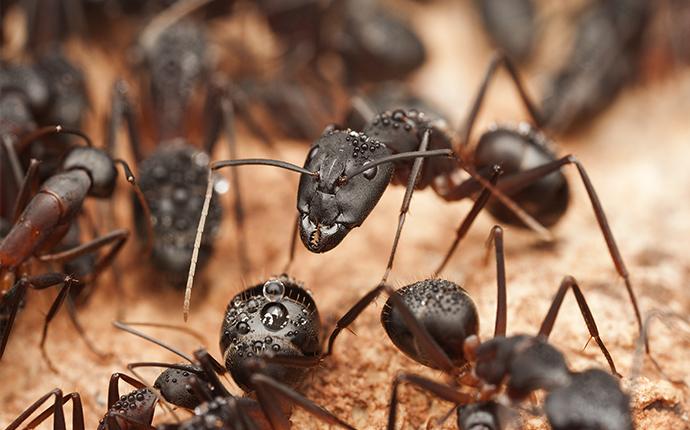 While all ants have six legs and oval-shaped bodies comprised of three segments, that is where the similarities end, as each individual species brings its own dangers and threats to homes they come into contact with.

Their huge numbers, combined with their small size and ability to get into almost anywhere, make them an incredibly difficult pest for the average home or business owner to handle working alone. Ants are also prone to create several colonies on the same lawn or property, making them exponentially more difficult to eradicate completely.

Types Of Ants In Western Washington

In Snohomish County, North Seattle, and the Eastside, the most common ants home and business owners face are odorous house ants, moisture ants, and carpenter ants.

Odorous house ants are a very small species of ant that are named for the strong, pungent odor they emit when crushed. Adults grow to between 1/16th and 1/8th of an inch in length and typically range in color from dark brown to black. They can be distinguished by their unevenly-shaped thoraxes.

Outside, odorous house ants are commonly found in areas of exposed soil, underneath firewood, or other organic debris such as compost piles. Odorous house ants typically find their way into homes while foraging for food, though heavy rainfall can also be a factor that forces them inside in search of shelter. Inside a home, they will try to find warm areas with high moisture that can provide an adequate place to nest, such as near hot water pipes. They can also commonly be found in kitchens, pantries, and bathrooms, three areas where food and water are in abundance.

Odorous house ants are not considered dangerous to humans. They typically do not bite people and are not known to spread diseases. However, they can still create a huge nuisance in homes they infest through their sheer presence as well as the odor they leave behind, and they can contaminate any food they come into direct contact with.

Moisture ants are named for their dependence on moisture in order to survive. They are typically about 1/8 inch in size and yellow in coloration. Moisture ants are attracted to decayed or moisture-damaged wood, and are often found in areas in the home such as bathrooms, attics, and crawlspaces.

Moisture ants are not considered dangerous to humans. The tubes and nests they create can commonly be confused with subterranean termite tubes. However, while moisture ants are a wood-destroying organism, they primarily speed up the decaying process of already moisture-damaged wood; they will not infest dry wood.

Because of their tendency to flock to damp areas, they can often serve as an early warning sign that you have moisture damage somewhere in your home. This also means that the only way to prevent moisture ants from returning once you’ve eliminated an active infestation is by finding and repairing the source of the moisture. Check for leaking plumbing or moisture problems in your roofing.

Carpenter ants are large, black ants, with workers typically ranging from 1/8th of an inch to 1/2 of an inch in length with the queen reaching nearly 1 inch in length. Carpenter ants are an incredibly destructive species of ant named for their tunneling activity in wood they find. These ants have strong mandibles which they use to excavate wood, which they do for nesting purposes.

As carpenter ants are generally active either within the home or underground, the first sign a homeowner becomes aware of to tell them they might have an infestation is usually the small small piles of sawdust they leave behind as they tunnel their way through wood, called “frass.” If dead insects are also nearby, this is an almost sure sign that carpenter ants are present - unlike termites, carpenter ants do not actually eat the wood they tunnel through, and will still hunt bugs and other prey in the area.

Carpenter ants prefer moist or water-damaged wood to reside in, so if you’re having moisture problems around your home you could be inviting carpenter ants inside. Typically carpenter ants gain access to residential homes through the eaves, door frames, and window frames on the structure, though they will also find their way in through the small openings found around plumbing and utility lines. Once inside, carpenter ants will forage for food and water, and are typically found inside kitchens and bathrooms.

Carpenter ants are not typically thought of as dangerous. They generally do not bite. The real concern with an infestation of carpenter ants is with their ability to damage and weaken the structural integrity of your home.

Pavement ants are light to reddish-brown in color and they generally nest in exposed soil under stones or pavement, and in rotting wood.

As their name suggests, these ants excavate soil from under pavement and stones, or under concrete slabs where they build their nests. Pavement ants will sting if trapped, and they are also a host for poultry tapeworms.

Western thatching ants are typically red and black in color and get their name from the large mounds that they create from various yard debris such as leaves, small sticks, grass, and whatever else they can find.

These ants swarm in late summer and early fall, and because they are aggressive, they will deliver a painful bite if given the opportunity.

These ants are yellow or brown in color and they nest in soil or rotten wood. Ponerine ants are generally found in urban areas when winged females emerge from buildings, and they can deliver painful stings that produce welts and other side effects if their victim is allergic to their venom.

Velvety tree ants are bi-colored and are typically dark red and black. Similar to odorous house ants, these ants will produce a rotten coconut odor when disturbed.

These ants are considered wood-destroying insects and can cause considerable damage to your home if not treated.

Pharaoh ants are either yellow or light brown in color and are frequently found in multi-unit housing or commercial buildings with an abundant source of food. They are known for being a major indoor nuisance ant and can spread diseases if not properly treated.

The danger ants pose differs based on the individual species you are dealing with, but the short answer is yes, they can pose a serious health hazard to anyone that comes into contact with them or lives in an ant-infested home.

While odorous house ants, moisture ants, nor carpenter ants are known to bite or sting humans, they can still present a very serious health hazard if they’re allowed to get into food and contaminate it, and while carpenter ants are not usually considered a direct threat to the health of the people whose homes they occupy, they can nevertheless create a massive burden for you by lowering the structural fortitude of your home.

Steps You Can Take to Prevent Ants in Western Washington

Due to their small size and ability to climb to almost anywhere, ants are incredibly difficult to prevent for the average homeowner. They can enter your home through even the most minuscule of cracks and from there make their way to practically any other part of the home.

There are some steps that you can take around your home and property to deter ants as much as possible and prevent them from getting inside:

Why To Call Guard Pest Control For Help With Ants

Eliminating ants from a property on your own is next to impossible. They’re small, capable of getting into almost anywhere, and often nest in the hard-to-reach areas of your home. While there are numerous DIY products on the market designed  to eliminate ants, these products are mostly ineffective without the extensive knowledge necessary to use them effectively. To make matters worse, if you fail to eliminate the entire infestation at once, you can rest assured it will be back in full force in no time.

To completely eliminate ants from your property, you need a professional treatment from a licensed and certified pest control provider. And there’s no better source for safe and effective ant control than Guard Pest Control. The highly trained team at Guard Pest Control know ants like the back of our hands. We understand the habits and habitats of ants, and we can target them directly at the source to eliminate the entire infestation.

Once the infestation is eliminated, we’ll then keep you protected through our Preferred Care residential pest control programs. These year-round pest control plans get rid of ants and other common household invaders with regular treatment visits. Don’t leave your property at risk for ants: contact us and schedule a professional pest treatment for your Snohomish home today!

Spring And The Odorous House Ant

What's The Best Way To Get Rid Of Roaches In My Everett Home?

Trying to figure out how to clear cockroaches out of your Everette home? Read on to learn the best ways to get rid of them!

The Most Effective Rodent Control For Monroe Homes

Worried about rodents getting into your Monroe house? Let's look at how to get them out and prevent them from getting in!

Wondering why bed bugs chose your home and how to get them out? Read on to learn how to rid your house of bed bugs!